ome texts quoted from the book, the English translation can only partially convey this old, romantic French writing style: if there is one region in the world where the picturesque ancient sailboat has sheltered and prevailed in its multiple facets, it is on the coasts of Indochina. A vast array of colours, the old scent of wood from the past… Nautical Indochina shows contrast especially in its fishing boats: each province has its own type of boat, all shapes of hulls, all the varieties of sails do their utmost to give us an image constantly renewed of maritime culture too regrettably ignored by the French and the Indochinese themselves. Very few are those who attempted to preserve their images, to describe their shapes, to speak of their poetry! 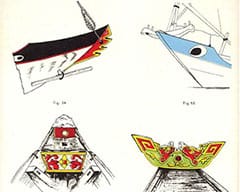 r. Piétri was a biologist, and a biologist in the old days was trained in pen, ink anatomical drawing. His skill came into great uses for boats illustration. His writing style is that of a romantic, nostalgic, old – school sailor, he was describing something that would soon pass away in Indochina, as it already had in the Western world: large fleet of sailboats in their daily activities: fishing, cargo transporting… He provided various information into a beautiful world that has now gone, even today we still can find wood – workers who possess the knowledge of building traditional hulls in VN (the number of them can be counted with fingers on your hands), some in – depth details like blocks, tackles, shackles, lines, sails, rigging… can only be found in his book. 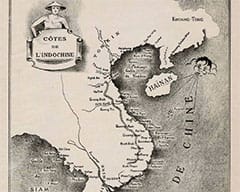 onsieur Piétri was Director of Fisheries of Colonial French Indochina (Vietnamese: Giám đốc nha ngư nghiệp Đông Dương), his career may had taken him to many watery parts of Vietnam, but only his passion for boat and sailing that resulted in Voiliers d’Indochine (Sailboats of Indochina), a book he’d spent many years working on, in the 30s the previous century, first published in Saigon, 1943, two decades ahead of The Junk Blue Book. I was reading it through an English translation of The Vietnam wooden boat Foundation, and its foreword: dedicate to Mr. J B Pietri in recognition of his passion to accurately record the creativity and ingenuity of the Vietnamese people in the building of unique wooden boats… 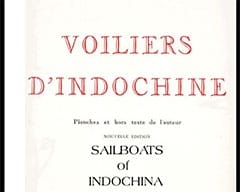 he Junk Blue Book – Marion C. Dalby, by its mission definition, is to provide knowledge to help identifying various Vietnamese indigenous boats, a military technical manual to be precise, not a book about boat design and construction. However it’s among the very rare well – written and fully – illustrated documents available today for us to know how, just half a century ago, our ancestors were operating sailing crafts. As in most of the world the working Vietnamese seamen had little interest in chronicling their environment, or perhaps they had no idea that such everyday life would be of interest to anyone… VN people is, as always, extremely easy to forget the past, and we’re today placed at a fait accompli of a now vanished culture!

Around mid 20th century, the Age of Sail has been long over in the Western world, while in Indochina, sailing crafts were widely used still, and Westerners came to VN seeing them from a “recreational sport” point of view. Many of whom were surprised by the diversity in boat designs and constructions, some were astonished by unique features that only VN boats have, some admired the beauty and performance characteristics of certain VN sailing crafts. One such person is J.B. Piétri and his book Voiliers d’Indochine (Sailboats of Indochina). A marvellous book, no photographs, but all beautiful hand – drawn sketches, not only do they clearly show technical details, but also illustrate the other artistic side of the subject. To be presented in my up – coming posts!

ore pictures from The Junk Blue Book – Marion C. Dalby, more about cargo boats (the previous post presents mainly fishing boats). First image in the series: a typical ghe bầu, the main “work – horse” of Southern people in the old days, ancestor of cargo boats usually seen in the Mekong delta nowadays (though the hull shape has changed significantly with introduction of combustion engine, I suppose). At the time of The Junk Blue Book, boats of this type were usually found around 100 ton in displacement, though in previous centuries, they were often constructed bigger at a few hundreds ton to be used for both trading and naval purposes. Ghe bầu composed the ‘spiral – cord’ of Vietnamese landlords’ navies in feudal time.

According to records of Western missionaries, adventurers, soldier – of – fortunes… who worked in Vietnam in the late 18th century, the Nguyễn and Tây Sơn lords’ navies both had a few 70 – guns mans – of – war, built and equipped to Western designs, but the majority is of ghe bầu type, with 20 ~ 60 guns mounted, capable of transporting upto 700 troops. Though these facts are likely, they’re still vague descriptions, there’s a lack of details and evidences. 50 – guns warship is a very strong frigate indeed, could be classified as 4th – rate ship – of – the – line, par the Royal Navy rating system, and should have the displacement at least at 1,000 (metric) tons, a question mark whether Vietnamese traditional boat building at the time was having such a capability.

ore pictures from The Junk Blue Book – Marion C. Dalby. Some history background: in the early 60s, Northern Vietnam government (DRV) started an infiltration campaign to support the Southern communists by way of sea. The task force, designated: Group 579, deployed numerous boats, built and camouflaged as Southern fishing or cargo boats, smuggled weapons and war materials onto various spots along southern coast below the 17th parallel. The advantages of secret lines of boats are obvious: only need a small number of well – trained sailors, much larger cargo capacity, harder to trace and intercept (compared to e.g: transporting by trucks, which required lots of labours for road building and protecting, which is hard to keep secret).

The US Navy took countermeasures, first by carrying out a study on VN indigenous boats: designs and constructions, outer appearances, sail plans, navigational equipments, operational zones and routes, methods and habits of fishing… in an effort to help identifying which are real Southern VN boats, and which are camouflaged Northern ones. The result is The Junk Blue Book, the study was taken place at a time when the majority of VN boats (over ~ 70%) was still operating primarily on sails. Ironical facts of history, that a work conducted initially against Vietnamese people, has now turned into a record of knowledge on Vietnamese sailing tradition, a tradition that has been long forgotten by its owner, very few people still care or even aware of it nowadays!

ome pictures from The Junk Blue Book – Marion C. Dalby (Vietnamese title: Hải thuyền thanh thư). Despite some little efforts here and there (to recreate at least one functional Vietnamese – traditional sailing watercraft), a brilliant tradition had been lost, for more than half a century, virtually nowadays, none still possesses the full knowledge on Vietnamese sailing as it was the old days.

We now can only view these beautiful images and admire a heritage that had long ceased to exist 😢! Anyone care to know can download a PDF copy (40 MB) of The Junk Blue Book (bilingual, English and Vietnamese texts in parallel columns) directly here, lots of details on VN indigenous boats, and lots of interesting images too! 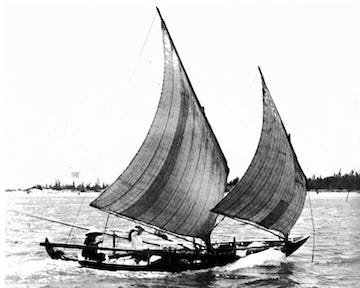 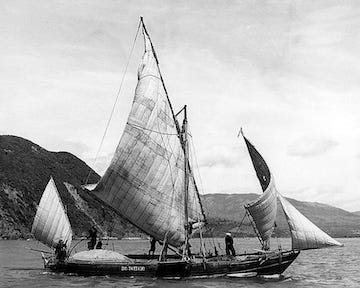 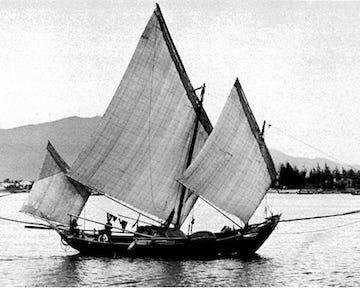 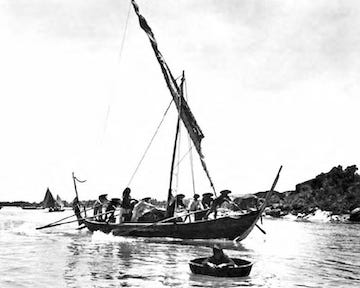 tay at the 15 ~ 16 kilometers level for quite long already and can’t proceed further, it’s just because of my limited time. In order to practice beyond the 20 km range, it would probably take up whole day, not within a single morning or afternoon that I’m currently restricted. Anyway, I’m trying to keep up a good sustaining speed at 5 km per hour (GPS – measured with my Garmin, consider the plastic touring – boat I’m using a kind of clumsy and heavy design), and improving my endurance as well: continuous paddling in 3 ~ 4 hours couldn’t cause much fatigue for me, even at noon while the tropical sun is burning “fabulously”. Experiments with backward – looking camera mounting, too bad that it was raining and so gloomy today for a good video shot!