ccording to this very fascinating news: part 1, part 2 and part 3, Vietnam navy’s first (ever) training sailboat is being built at Conrad shipyard, Poland. Well, eventually, what I was thinking back many many years ago is being materialized, can’t imagine that this could be true! A navy longing to be strong should have its personnel trained, first and foremost, in this very harsh and rudimentary way as in the Age of Sail, just for the true spirits of seaman and seamanship.

The boat is speculated to be similar, but larger than this Zygmunt Choreń designed, 380 metric ton, schooner barque rigged, ORP Iskra (Polish naval training vessel Iskra, showed in the image below). Some information on the boat under construction: LOA: 67m, LWL: 58.3m, beam: 10m, draft: 4m, 3 masts (about 40m in height each), 1400 m2 of sail area, with a crew of 30 plus 80 training cadets. The ship is planned to join Vietnam People’s Navy sometime in autumn this year. 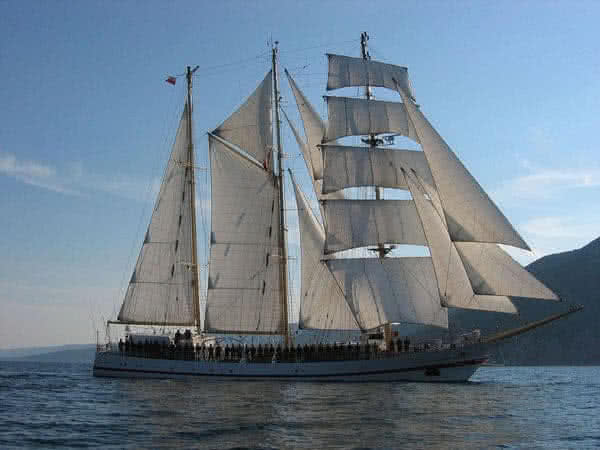 ast batch of updates for my kayak before Tết (Lunar new year), a detachable and retractable light (and camera) pole. At a bicycle accessories shop, I found a small signal light which uses solar cell (about 3 square inches in area). Testing the LED torch showed that after being fully charged, it could continuously blink for two nights, more than enough to be used for the boat. It has 4 blinking modes, which could be changed by a switch located behind.

The light is small, lightweight and most importantly, doesn’t need a separated battery since it uses solar energy (that means: less thing to be cared for in a journey). The pole, in its retracted position, is high enough for the signal light to be visible from other vessels on water. When the GoPro is in used, the pole is extended about one foot higher so that the camera could get a better view ahead of the boat. And the whole thing could be used, as a… selfie stick when needed.

Screw off the pole from the connecting dock bolted down to the aft deck, attach my other Canon D30 camera to the end, then I have a selfie stick in hand. Well, I’ve been concentrating more on boats and paddling, not the photography things, but it’s better being able to capture the beautiful scenes along the paddling way anyhow. There’re still many things to be done for the kayak, but that would be until the next year. For now, just more and more paddling, 25 km every 2, 3 days or so.

May the new year comes for me with more will and determination to reach my dream target. The more I understand about the task, the more challenging I’ve realized how it would be, for now, I’m not sure still if I could make it: lots of practicing and preparing, a huge deed of efforts and endurance required to make that 300 km (6 ~ 7 days or more) journey. May the new year comes with more internal calm and balance, for me to live wholly in this simplicity and purposefulness. 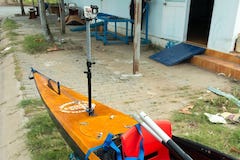 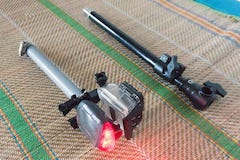 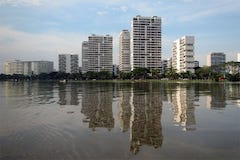 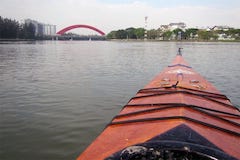 ade some more miscellaneous improves to my HW – 3 kayak… First is filling the two boat’s ends with Polyurethane foam. For an example of how PU foam works, see a demo video here. It takes just a few minutes for the mixed – two components to expand into a closed – cell (water proof), somewhat rigid structure. The foam I bought is exactly the one used for refrigerators’ insulation (see the 2nd image below, two bottles containing two components called: Polyol and MDI).

The foam adds about 600 ~ 700 grams to the boat’s weight, it fills about 1 meter of boat length at both two ends, occupying a total volume of about 60 liters (estimated). This is just an act of precaution, as in the worse case should the boat cracks, or if there’re holes punched into the hull, the whole boat could be flooded, but it will still stay afloat. I erect the kayak upright, pouring the mixed PU foam through the hatch, wait for 15 minutes, then repeat the same thing for the other end.

Instead of making a complex foam seat as I originally planned (which could be very time consuming cause it requires creating a mould), I chose to install instead the simplest thing that works. Bought a small plastic kid seat, cut the four legs away. A strap line helps holding the seat in place (bolted to the cockpit coaming) and supports its back. The size of the kid seat is about right, not too small for a comfortable ride, and not too big so that a spray skirt could be deployed later.

This season, Christmas, Gregorian New Year until Lunar New Year (about 1.5 month from now) the city is decorated with all kinds of lighting, creating splendid sceneries. I’ll try to have some night paddling to capture those colorful moments. With the overpopulation situation in Sài gòn becoming worse and worse day after day, I dare not step into the urban districts these days anymore, viewing the city from above the water seems to be a very nice alternative option to me! 😀 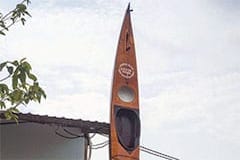 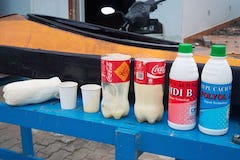 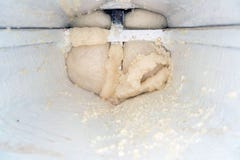 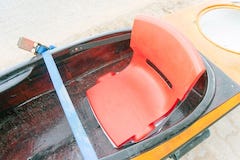 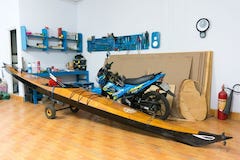