he ATR — 72 takes off and heads for a due — south course. It’s been a long time since my last boarding an ATR — 72 airplane, perhaps 8 or 9 years already, and that time was not a pleasant experience at all. But this time, the same kind of turbo — prop shows sturdy and clean actions during taxi — ing, taking off and landing, leaves passengers with safe and comfortable feelings. Quite a short flight, 15 minutes of climbing, 15 more minutes in quite a low — altitude path, just a bit above the lowest cloud ceiling. The ground, rivers and canals, stacks of clouds and their casted shadows on the terrain below, all in a bright sunny day, slowly passes by my eyes just like layers in a parallax scrolling game. When it started to meet the sea, where the plane’s low altitude allows seeing large ships and their long trailing wakes on the immense blue surface, the captain announced: “prepare for landing”, the island is just 50 miles off from shore, and the plane glides softly to the group of islands clearly visible above the horizon.

It’s only when the jet fuel smell soon faded away that I realized where’ve I been to, Poulo Condor, with it’s distinctively — sweet smell from a special kind of grass, after which the local airstrip is named: Cỏ Ống. This pleasant smell, together with smells of other kinds of flowers that I’d already known, fill the atmosphere all the way along the rocky coast to the island center, a tiny town, a fishing village to be exact. It’s strange that I immediately get a feeling of coming home, thought it’s only the first time I’ve been here. Short and narrow roads with French colonial style houses, a post office, a police station, a “hospital”, only one gas station in town… At sunrise and sunset, public loudspeakers transmits in the air news of the day, and every hour, the post office’s clock tower rings a short tune and strikes the bell announcing time to the whole town. All of a sudden, I feel as if I’d flown back into a very old time, when daily life routines are bound to maritime practices, when not every home can afford a radio for news following, and a clock for time keeping!

Poulo Condor is the old name of the archipelago now called: Côn Đảo, its main island certainly has the hallmark of, a scaled — up model of, my childhood’s dream: tropical the island breeze, all of nature wild and free, this is where I long to be… It’s not that kind of straight roads with uniformly lined trees, all trimmed to the same shape and size, it’s not that kind of industrialized golf field grass, all mowed flawlessly. It’s almost un — touched nature, with thousands of different species, all mixes and struggles to create the uniqueness of this biosphere. It’s uncontaminated salt — like white sand dull, and pure jade — blue water. It’s plenty of insects annoyingly flying around in the evening, while you’re enjoying some fresh seafoods bought straight from fishing boats on the beach! It’s the wuthering wind outside the windows which scares me a bit at 2 AM then I realized those sounds are just normal on an all — sides — sea — faced island. It deeply reminisces the smells and sounds of a small, then “half — civilized”, fishing village where I’d originally grown up!

The town lies in the middle of 2 ports: the naval port 12 km (road distance) to the south, and the airport 12 km to the north. Everything on the island is a bit pricy for tourists, since with the island’s self — productions are just some sea harvests, most goods need to be transported from land by ships, which depend on weather to operate. The main power plan, locates in southern outskirt, runs totally on diesel, and much everything depends on it: ice making, water purification, air condition… at night, to conserve electricity, roads are just barely illuminated. Tourists would find some restaurants in town, but not any bar or discotheque. I think it’s better that way, don’t bring modern living with biohazard things here, one should come only for relaxing: swimming, coral diving, fresh foods, and the marvelous natural scenes all around. I’ve been to many beaches in Vietnam, not yet to find any place where sand is such fine — grained and white, and water is such pure in splendid emerald or jade color tones like they are here at Poulo Condor.

Life is old there, older than the trees, younger than the mountains… in the afternoon, I was wandering around, dans la chaleur immobile, and found out that music on the island is quite outdated, mostly the 70, 80’s oldies, which can be both a good and a bad thing! To my surprise, many of them are often of good quality, Phạm Duy‘s songs are much very popular, in one occasion, I realize Hà Thanh’s voice in the air, some modern good pieces of Phú Quang, and one evening on the quay, I heard Sheila singing Poupée de porcelaine and many other French oldies! Alas! At least there’re ones who have an average taste for music! Even the teens who stick their noses to the mobiles all the time here don’t listen to those contemporary “youth music” rubbish often. I guess, despite what we call “civilized”, for ones who were born in the purity of air and water, they naturally have the ability to judge what is a “below average taste”, and obviously have certain degrees of immunity to modern cultural diseases which are spreading our time like cholera!

On the east side of the island, where it faces the ocean and receives direct winds, the sand is whiter and more fine — grained, the forest is of mostly short trees and bushes. On the west side, where it is about 50 miles from the Mekong delta, the beaches’ sand is not such white, it’s yellowish, but the forest is taller and denser, almost can be called rain — forest. Along the coast, where small fresh — water springlets join the sea, mangroves and mangrove palms can be seen here and there, in small populations. Just a few kilometers around the main island are colorful coral reefs, which are in better preserving condition than anywhere else in Vietnam. I’m not a biologist or geographer to know in depth about all this, but it’s purely pleasant when you walk around the land and sense that kind of fragrant, ripe — guava — like smell, it’s plainly wonderful when you can take a short nap, under shadow of the forest, with sounds of dozens kinds of bird around, to remind that there’re active and rich lives out there, in every corners of the island.

Just seven days, but a really good time for me. There’re days, the sea is so calm that I can lay myself half floating, half sleeping on its surface, about a kilometer off from shore for hours, just to catch the fishermen who pass by on their small boats by surprise (my swimming skill hasn’t been “rusty” yet, but it would need some practices before I can swim several kilometers without resting again). There’re moments of heavy rains, which pour water on one half of the island, masking everything behind a dim and dark curtain, while leave a splendid bright sunny landscape on the other half in contrast. The gales here are strange indeed, they come out — of — the — blue, with very little warning signs, so speedy that sometimes, sailors on motor boats have to cut anchor cable to rapidly escape from them, in order not to frighten the tourists. Life on an island can be boring for ones who have accustomed to crowded urban, but not for me… already had in mind another plan, another idea for coming back here, in a time not too remote away. 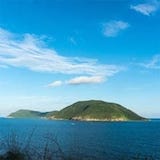