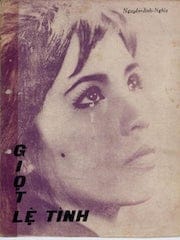 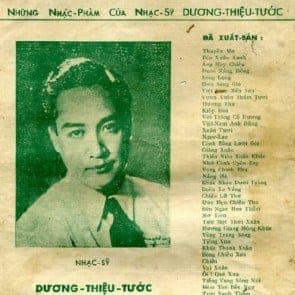 he only song posted twice on my blog, my previous post is here (this version is performed when Charles was still young, a much higher tempo). I’d listened to both the vocal & instrumental versions of this song long before, but didn’t recognize that they are actually one same song. Just by a sudden special chance in Dalat made me realise that it is Paul Mauriat who was covering Charles Aznavour.

Charles Aznavour is a very big name in American & French music, but much more popular in his French audience. Till now, he still go to stage and have many performance at the age of 83, and still attract and seduce a lot of listeners. He is called by the title French Frank Sinatra, but to me Charles Aznavour is much more different however, Frank Sinatra didn’t wrote the song himself.

y new Dell Inspiron mini 9 notebook: the company laptop is far too heavy to carry back and forth daily, and this is really a cute tiny toy to have. Having dimensions briefly larger than a pencil, the notebook is really light, its display is bright and clear, sound is pretty good, and the external speaker is amazing for such a mini notebook.

This is a laptop with no moving part: hard disk is solid – state (16GB), no ventilating fan (the temperature is just right after long use). The disadvantage with the toy is that keyboard is quite small and strange, which may take times to get familiar with. Ubuntu (Hardy Heron) came pre-installed, and every softwares work out-of-the-box: graphics, sound, wifi, webcam…

The distro is a customized version for Dell called Netbook Remix, however, after a while, I get bored with that and switch to the default Gnome view. The good point is that mp3, Acrobat Reader, Adobe Flash, Sun Java… licenses come with the distro, there’s no need to hack for these stuffs. Please see below for some GUI screenshots.

C makes U hang yourself;
C++ even gives U a rope object to hang;
C# scourges U using a rope wrapper!

rarely talk about programming unless it comes to some new idea or something fun. However, in this article, I’m going to summarize a part of experiences in my career, about important concepts that I’ve learned and used: signals and slots. First appear and remain as fundamental concepts in the Qt library (“Qt” pronounced “cute” – which is so cute as a cross-platform application framework), the concepts has been adapted and developed into some other libraries (such as boost) and are being proposed as next standards for C++ language.

Please note that we’re talking C/C++ here, although signals & slots has been brought to many other languages (Java, Python, Ruby, JavaScript, etc.) Every coin has two sides and C/C++ is no exception, it has its own advantages and disadvantages (depend on types of applications). But the thing I like about C/C++ is that its half – civilized nature made it a strong language: the balance between abstraction and comprehensiveness has always been considered as core factor.

Noone want to build general applications using Assembly, and noone want to write lengthy code just for some simple features. To adhere the doctrine, strong – abstraction concepts must be introduced to capture grammar of the language, and simple, clear syntax that would make the code concise and comprehensive.

I came to signals & slots as solution to problems I’ve met when leading the CMS project, a DVRs managing software (client & server) with complicated GUI: a few screens, each screen can have a dozen tabs, each tabs can have hundreds of controls. Events on one control can affect other controls on other tab or screen, events can be user inputs as well as various signals come from dozens of (managed) network client machines.

The overwhelmingly – complicated communications surpass every MPM (message passing method), then signals & slots appeared as a saviour solution. To be simple, signals & slots is a very efficient mean of interaction between objects within a process space. I personally think it would be the next metaphor extension added to C/C++ language. Structure of this post would be as follow:

1. Introduction to signals & slots, from raw to abstract concepts.

2. ISO C++ compliant and cross – compiler, cross – flatform problems (would discuss about delegate and how function pointer has evolved from C to C++).

When move to C++, things are a bit more complicated (note the weird syntax ->* to call a member function through pointer).

Now, imagine slots as invisible communication channels, every object can register to listen to some channels by providing delegates (pointer to a member function). The delegate would be invoked when slot is “filled” with a signal. The signals and slots mechanism is type safe: signature of a signal must match signature of the receiving slot. Signals and slots are loosely coupled: a class which emits a signal neither knows nor cares which slots receive the signal. To summarize the benifits:

To summarize section 1: pointer is the root of all evils. Function pointer is the physical of callback method traditionally used in C programming. When evolved to C++, the C++ standard committee failed to address how to define function pointer to a single C++ object. With common-sense knowledge, we know that it take two elements to represent the thing: first is the address of the object itself (the implicit pointer this), second is pointer to the object’s member functions. The undefined land leads to different implementations across various compilers.

Contrary to common belief, the actual physical storage of pointer differs between various compilers, and even differs between types of pointer, e.g: pointer to a single – inheritance object, an multiple – inheritance one or virtual inheritance. The table below shows how many bytes it take to store pointers on different compilers (just make use of the operator sizeof). Then to calculate the actual member function’s address, each compiler uses one kind or another of offset:

So, delegate is just the new name for pointer to (an object’s) member function. The hard part really is that: since each compiler stores different type of pointers differently, there’s need for a way to store delegate in a universal manner: cross compilers and cross flatforms. Various techniques have been proposed by excellent programmers. Please refer to the articles below for specific techniques. I personally would prefer the method of Quynh Nguyen, an engineer at Global Cybersoft (Vietnam) Ltd.

To make those obscured concepts above clearer, I would go into some detailed implementations of signals & slots with the emphasize on the sigslot library, for this is really a compact lib: everything is contained in just one header file. Suppose you have a server that would receive some signal from network (tcp socket), then parse the received data and trigger some processing (display on GUI, store to disk…). We would define the “network signal” as follow (please note any number of parameters can be defined, we use an int and a char* here just for the example):

Then, at the place you want to process that event, e.g some class CDisplayForm, you would need to provide a function to process the signal:

DisplayForm::OnNetSig (int cmd, char* data)
{
// the delegate would be invoked
// when the signal is recieved
}

Please note that multiple objects can register to a same signal slot (and vice versa), e.g some class CRecordThread would also need to log that event to database. Then the listening objects would just register with the signal slot using a connect function:

// we pass the function pointer
// here to be called later
m_netSig.connect (this, &CDisplayForm::OnNetSig);

When the network signal arrive, e.g in some class CAsyncSocket, we would fire the signal and get it populated to all connected objects:

Then the CDisplayForm and CRecordThread object would both receive the signal. Please note that when either end of the communication channel go out of scope, the connection is automatically removed, you don’t have to write any cleanup code. Just define the signal, the slot and wire them up! Any unrelated classes can be wired up in this type-safe manner without any pre-defined relation within them. 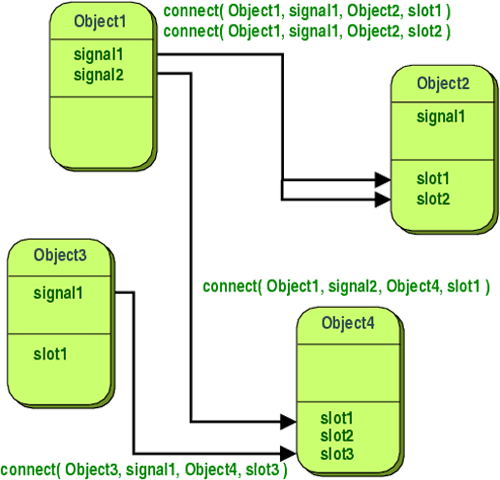 Speaking as an ex-hardware designer, I’d like software components to have pins around their edges, like ICs, so they can be ‘wired up’, but otherwise should be well behaved… I don’t want to know how that pin is wired internally – I just want to know that it will work when I send a signal into it.
(Sarah Thompson – sigslot library) 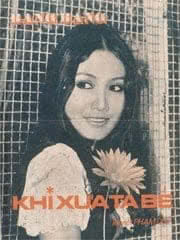 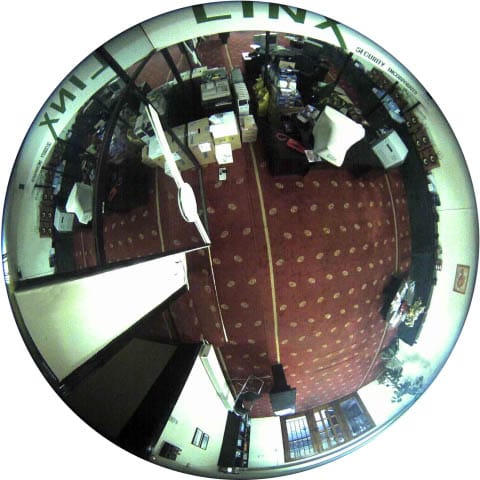 Image above: Ipix’s raw format (spherical image). Click to try the Ipix static image viewer in a separate window, which helps to view a single Ipix’s frame, wrapping from raw format to normal rectangular format (not the video).

his is among the most interesting things I’ve ever worked on: Ipix’s CommandView™: fish-eye cameras which provide a 360° x 180° field of vision. This camera and it’s technology were very special and advanced at the time, about 3, 4 years ago, it were so new that the manufacturer could not survive the small market share and went bankruptcy. However, the technology has now revired at http://www.ipix.com. The camera came with some totally new concepts, patents and technologies. Some information on Ipix:

Ceiling or wall-mounted, with thick hard steel cover, the camera is designed to operate indoor or outdoor, and can withstand a temperature range from -40°C to 60°C. It costs about $2100 at the current time, and about $5000 when it first appeared. CommandView™ Dome is an IP camera, having a small Linux computer inside, once plugged onto LAN or WAN, the camera turns into a video server and can stream video in many protocols: http, ftp, rtp, or multicast. There’re 3 ways to control the camera: ssh to the Linux machine, access to it’s web-server or programatically use the XML-RPC interface. The product has a very matured and solid development flatform.

CommandView™ Dome is a mega-pixel camera (2 MB, 3 MB). The unique feature of this product is that it provides a 360° x 180° field of view with no moving parts. See the image beside (on the left – click to view a mega-pixel version), every details in the room is captured on a parabolic sphere (called wrapped image). To have a normal view, a region on the sphere is dewrapped (by software) into usual rectangular plane.

Since a whole 360° space is captured, PTZ (pan / tilt / zoom) is just a matter of dewrapping, there’s no need to motorize the camera for different sighting fields. This special camera has broadened the definition of ‘panorama’ and has many applications in security surveillance as well as photography. I myself found it very interesting to apply the concepts and softwares to demonstration and show-case purposes (search for ‘ipix’, the name has gone far beyond just a type of camera).