ade several short paddlings (10, 12 km) to trial my newly – built Serene – 2 kayak. The overall feeling is very pleasing, the boat is much easier to control compared to my previous one Serene – 1, and it’s faster, taking up momentum in just a few light strokes! But the velocity measures would be postponed until I could finish all equippings, all adjustments, and begin longer paddling to know precisely.

Yesterday, I had a capsize in my kayak, reason is that the seat raises the center of gravity (CG) by approximately 5 cm, just a very short distance but severely affect the boat stability. This is something I’d already knew in the designing phase, but still try to do the silly thing of installing the inappropriate seat. The solution is quite simple: remove the seat, just sit barely on the bottom, and build just a back – rest instead.

Apart from that, everything works well enough: the bilge pump, the rudder and rudder pedals, other electrical devices, etc… The shorter hull reacts more sensitively to load balancing, the kayak needs to be trimmed a little bit further aft to reach its most stable point. I’m especially happy with the rudder, to give a decisive conclusion on the Rudder vs. Skeg debate: the Skeg is simply left too far behind to argue! 😀

Only long paddling would tell, if there’re some significant improves in “economical speed”, the important point of a kayak designed for cruising: the minimum effort required to propel the boat on large distance and in prolonged period of time. It takes some more efforts and times to really complete harnessing my Andalusian horse and make it ready for sea paddling trips in this Northern monsoon wind season! 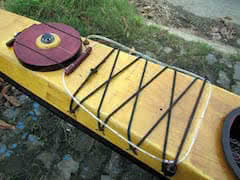 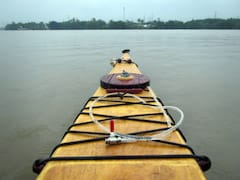