ade several longer paddlings (15 ~ 20 km) to see how the kayak would perform. As with all my previous boats, it takes some little time for me to adapt myself to a new boat, in particular, the primary stability. Each kayak differs by a little, after a few dozens of kilometers, I would feel more comfortable and confident with the boat’s motions. Only after that, the speed measures could be evaluated more accurately.

The Garmin GPS data shows that I could sustain about 7 kmph with my new kayak. That’s pretty much very good, though only slightly better compared to Serene – 1 (it was about 6.5+ kmph). The 7 kmph value is very closed to the average speed that other famous sea kayakers would usually make. The improvement at this point is very critical, since I can hardly make any more gain without sacrifices to the boat stability.

The weather this season is quite ideal for paddling, the temperature is dropping to around 20 ~ 25 degree (Celsius). The Northern wind is blowing, but much a lesser amplitude compared to this time last year. But too bad, I’m quite busy with my works and can’t spend much time on water, my paddling performance is not truly at its peak, so it’s still early to say more about the new kayak’s performance characteristics.

Anyway, I’m feeling very pleased with my new kayak, and I think that with more training, I could bring her to a much better performance level. Some more works required still on the kayak though, in essence, I would have to rework the USB – charging circuit, the current one is over – powered by the 3 powerful Lithium cells and wouldn’t work very well. Christmas and New Year season is coming, happy season to everyone! 😀 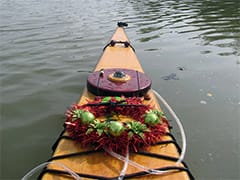 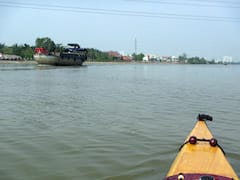