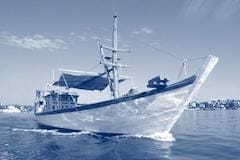 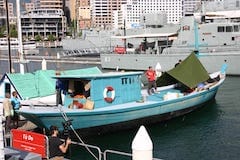 The boat now belongs to the Australian National Maritime Museum. It has been refurbished and restored to the original design with the help of the Lu family, and preserved as a museum’s fully – operational object to demonstrate the country’s immigration history, the whole story is recited here.

nteresting story about a Vietnamese boat – people‘s vessel, the one dubbed: Tự do – Freedom. In 1976, the boat was laid down at Phú Quốc island as a dragnet fishing vessel, a construction built just for the escape from the newly – formed regime (1975). Mr. Tan Than Lu planned his escape meticulously along with his family, relatives and friends.

The hull (as seen in the images) still incorporates in it some Vietnamese indigenous ship building features, the registration number reads: VNKG1062, which indicates that the boat originally had its home port in Kiên Giang, Việt Nam. Hull dimensions: 19.4m (length), 5.2m (beam) and 1.8m (draft). It must be noticed that the Lu family is a very rare case among almost half a million of Vietnamese boat – people at the time, very few could afford building such a boat for escaping, and few had had such a lucky and successful trip.

The boat involved in fishing for half a year to allay government’s suspicion. Then pretended to have an engine breakdown so that surveillance of them would be relaxed, a more powerful replacement engine was installed during the night, children were given cough medicine to make them sleep and keep silence, the crew of 38 departed on Aug 16th, 1977. They arrived at Mersing, Malaysia, where 8 passengers were disembarked as refugees.

After one month of unsuccessful approaches to the US Embassy, Mr. Lu decided to set sail for Australia with the remaining 30 people on board. They were resupplied and encouraged to move on by the Indonesian authorities. They reached Darwin, Australia on Nov 21st, 1977 after a 6000 kilometers journey guided only by map torn from a schoolbook and a simple compass.