he bilge pump is a critical component of this Serene – 2 kayak. Empty out a flooded boat, or simply make your seat less wet, it gives you lots of confidence and convenience on long paddling trips. Today, I installed the bilge pump with its water hose (through a hole drilled on the port side). Electrical wires are connected and carefully sealed inside plastic tubes with silicone glue to make them really waterproof.

I wouldn’t want the whole system to collapse just because of one leaked electrical wire (anyhow, there’s still the fuse in case of a power surge, e.g: short circuit somewhere). Watch the short video below to see how the bilge pump works, it’s just so great! 😀 I would just move a wooden knob (the reed switch), and the water jumps out! The small “buzz, buzz” vibrating sound of the bilge pump is so fascinating!

One problem, however, due to the very deep V – bottom of the kayak, some small amount of water remains still at the bottom which could not be sucked out by the pump. That’s not a big problem anyhow, cause I would install a seat that raises me a few centimeters higher on the floor, and wouldn’t make my pant soaking wet. In the video, the water flow doesn’t look very strong, since the battery is already running low.

I would make more thorough testings to see how the whole system works in combination: battery, solar panel, lights, and bilge pump! But I would wait until the 12V battery “fuel gauge” shipped from Amazon, so that I can have exact measures on the battery usage, how many times it could pump out a boatful of water. It’s important to understand how your system works, so that you could make good uses of them on longer journeys! 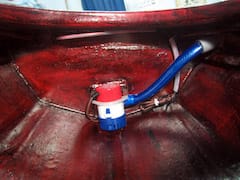 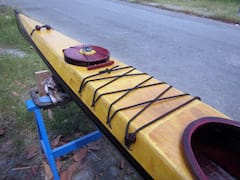 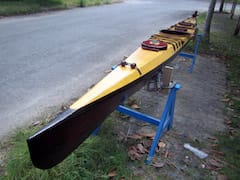 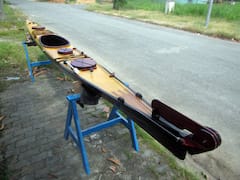