ectified one problem with the signal light, the bulb is too greedy, it eats up a lot of electricity and could potentially burn up the reed switch (I’ve noticed the reed switch has malfunctioned sometimes due to the high current). So I replace the bulb with 8 small white LEDs (1 Watt each). Some more soldering work, but finally it’s done, equally bright, but less power consumed, and safer for the switch.

Today, I installed and tested the rudder system. First is the two cable lines used to pull the rudder up and down. The 2 lines run back to the cockpit and are attached to 2 small wooden balls, with a short segment of bungee cord. Third image: the wooden balls and bungee cord. The bungee serves as a shock cord, in case the rudder should collide with some thing and kicked back, so that no damage would be done to the whole system.

One simple rule to operate the pull up / down lines: grab the ball that is further from the cockpit and pull it. Well, it sounds pretty simple, but useful enough, when in action, you just don’t have to think over and over again: which line is up, and which line is down! 😀 The two rudder control lines run back to inside the cockpit where they’re attached to the pedals via 2 small wooden jam cleats to adjust the lines’ tension.

All works well, but the pedal motions are not really smooth, because the bungee cords are not strong enough to pull the pedals back (once one pedal is kicked, I would just have to kick the other pedal to balance the rudder). But I would just leave them as they are for now, as they’re working already, would consider replacing the bungees with stronger ones (or revise the design a bit) later on. 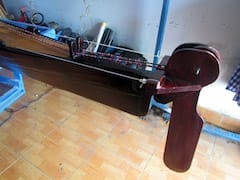 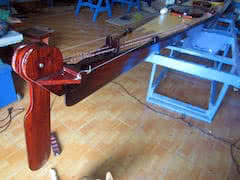 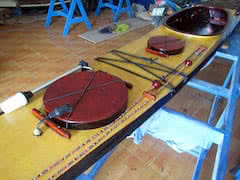 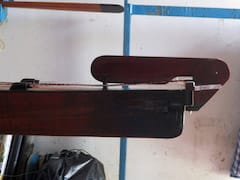