irst image: the basically completed hull, put aside, now working on the deck part. Compared to the hull, which is… simpler and more well defined in term of geometrical shape, the deck is just loosely draft out in overall shape, it’s cut slightly over size, so that when fitted together with the hull, it would be trimmed to match. The construction is also more complex, due to the rounded shape of the forward part.

I had a hard time thinking about the cockpit and spray skirt size. A width of 44 cm is almost the minimum that could fit a cockpit, that in turn, could fit the smallest spray skirt sold on the market. Ready – made spray skirt (e.g: Snapdragon, Seals, Sea to Summit…) usually have 44 x 75 cm as the smallest dimension, other than that, you would need to order a custom made one, which is an expensive and complicated process.

Second image: drafting out the deck shapes on plywood. Third image: jointing the pieces together, again with those simple finger joints. Fourth image: the two main “components” composing the deck, the aft (far, left), and the front (lower right). I slightly bevelled their edges at places, so that they could fit more precisely together. The white duct tape: pin down the parts so that they’re correctly symmetrical along the longitudinal axis.

Next is the very important job of torturing the deck into rounded shape. By now, I’ve realized that there’s too much curvature on the molding frame, and I wonder if the plywood could bend that much to make a very curved shape, only experiment would tell. In order to help the ply bending well, I would make many longitudinal cuts on its internal side, then wet it completely overnight for the wood to become more flexible. 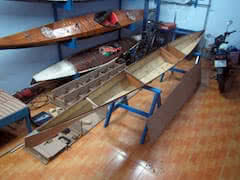 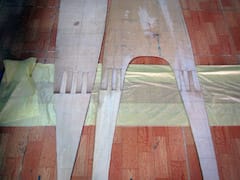