fter the internal side get glassed, goes in the gunwales (American English: the sheer clamp), port and starboard at the same time. The gunwales are very thin strips of wood, 2.5 x 1 cm in cross section, and are bevelled at 45 degree all along its length (they are bevelled with my table saw), later the bevel angle would be adjusted along the boat hull (with an angle grinder) to better accommodate the deck.

Second image: the 3 bulkheads, the small compartment right behind the cockpit would be the place of the day hatch, to store food, drink and other various things you would frequently need during a paddling day, and could be accessed while afloat (still sitting inside the cockpit). For other hatches, you would need to beach the boat in order to access them. Third image: the bulkheads are filled with putty at the joints and glass on one side.

Fourth image: triangle blocks of wood use to reenforce the joint between the gunwales and the bulkheads. With no need for nail or bolt, the triangle wooden blocks link the squared corners, this way, the kayak’s “frame” would be significantly stronger, stiffer, a simplest, yet elegant solution 😀. There’re two additional thwarts installed near the bow and stern to strengthen the boat’s overall structural stiffness.

Completed most jobs with the hull (there’re some more on the external side of it – puttying, glassing… but that would be a later phase of the project), now moving on to the deck part. It doesn’t seem immediately apparent, but the deck part is a more complex part, compared to the hull, it would house many things: the 3 hatches, the compass, the rudder pedals and control lines, the anchor points for bungee cords, etc… 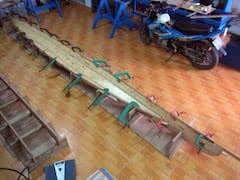 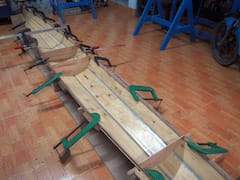 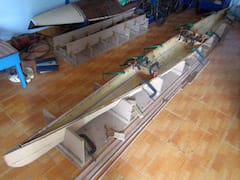 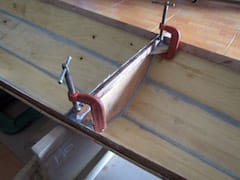