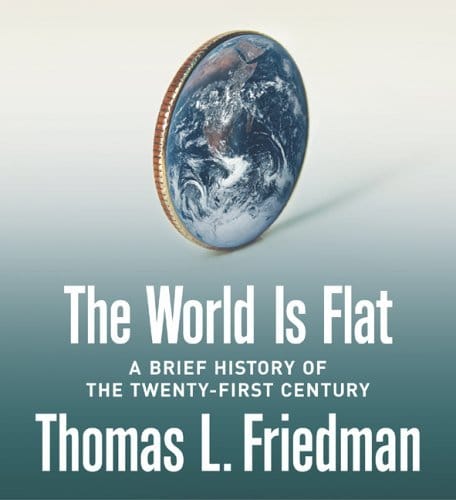 Friedman is right that there have been dramatic changes in the global economy, in the global landscape; in some directions, the world is much flatter than it has ever been, with those in various parts of the world being more connected than they have ever been, but the world is not flat… Not only is the world not flat: in many ways it has been getting less flat. (Nobel Prize – winning economist Joseph Stiglitz)

The popular expression that a capitalist will even sell you the rope you need to hang him with seems to be becoming increasingly true. Aronica and Ramdoo’s book is an important addition to the literature of globalization and a necessary therapy for all those whose minds have been in touch with Friedman’s glib phrases. (blogcritics.org)

After reading the book, I got the feeling that Friedman would even sell you the rope to hang yourself (not him) and I’ve thought there’s quite a lot of people who would willingly buy the rope!

would tell you how I usually encounter a dialogue taken place in Vietnamese, a pattern that repeats over and over again, and people never learns a thing, neither do they actually have a little sense about real things behind it. Here’s how the dialogue would go on, taken an example to describe the pattern: A (a certain person): I’ve recently read the book “The world is flat”, and really love it! Ah ha, the world is truly flat!   Me: No, the world is not flat!   A: I would suppose you don’t mean it geographically, think about it like a metaphor to get the philosophy of the book, man!   Me: No, the world is not flat!   A: You never get a thing, you crazy!

By now, anyone with a second thought should recognise my meaning either geographically or metaphorically. After that I asked him something into the content of the book. It turned out he knows almost nothing of the book except its name, and parrots the name as if he had found a “holy truth”! Yes I would certainly understand, while everyone was reading and everyone was saying the world is flat, he wouldn’t dare saying (or even thinking) the opposite. My opinion about the book could be right, or it could be wrong, but actually I won’t argue on the surface of phrases, flat or not flat is just a matter of words, what important is the book’s content.

I’d read through the more than 300 pages of the book which takes its examples, facts… exclusively in the Information Technology contexts, either in India, China or other Asian, Latin countries. It is full of details of only the IT industries, details about out – sourcing, internet, software work flow, email, network phone… the things usually seen in outsourcing service. Obviously the author meant a similarity for other fields, other industries, which seems to be a too restrictive point of view, we all know that IT in fact is only a very small fraction of the economy (taken the VN textile industry alone for an example, its estimated yearly revenue is roughly 12 ~ 15 times bigger than the IT counterpart).

The book concentrates on globalisation: the trends of out – sourcing, the way people communicates, the way firms process information… The author propagates it as “a way to be”, a trend, a life style that is absolutely irreversible. Also Friedman considers open source software the most disruptive force of all of the trends since it allows knowledge to be freely distributed and decentralised efforts could be cooperated. Friedman also encourages young American to become scientists, engineers, mathematicians… leaving low – level labour jobs to other countries. The author also tried to relate those vast details with other profound social and political problems.

I have never read anything so “colonial” like that book. It takes a lot of facts, truths… in a small sector of the economy and tries to provide a biased and exaggerated point of view. To exactly quote the author: When the walls came down, and the windows came up, windows can not come from thin air, there’re always “invisible” walls somewhere, and most of the times, those invisibles are much more overwhelming than the visible ones. In fact the book only receives “warm appreciations” in the field it’s related with, and aiming to, that is IT, it does tremendously receive negative reviews right in the country of its author (you can easily check out the web for that).

The world has never been flat, anywhere, anytime. It’s not flat in the sense of people about their living conditions and standards. It’s not flat in everyone’s mental and psychological status. It’s not flat in different life styles, in people’s hugely diverse definitions and pursuits for happiness. It’s not flat even in the American (or any Western) societies, whose tradition has always been the supporting for personal values, think and do differently. It’s not flat as human as a physical and mental objects are bounded to geological and social constraints, and human is more a complex creature rather than, over copper wires, a piece of (possibly cleverly falsified) transmitted information.