ust got the new iPad (or we called it: the iPad 3) in hand today and I’m stunned by it’s new retina display. There’s not such a fever like when the iPad 2 was released, I guess since the new iPad is almost identical to iPad 2 in appearance, people will consider about the fact that they won’t be able to show it off. In term of general performance, iPad 3 does not stand out to the previous iPad, or it could be worse in term of 3D – OpenGL performance according to some reviews. From a programmer’s point of view, this could easily be understood since doubling the resolution means 4 times the memory and processing power for each graphics API, which also means Apple has been pushing things over the Moore law’s limit!

Personally I’m not really a passionate fan of these Mắc – Xinh – Tốt ⓵ (Macintosh) assets, but professionally as a computer – graphics coder, I’ve always admired the prestigous 2D graphics tradition come with Apple’s products. Back to the retina display, on the left is a reduced – size screenshot of this blog taken on the iPad 3 (see full version here, it would take some times to load).

2048 x 1536 is a huge resolution that does magic to the vector things, e.g: displaying fonts! Not only the screen is much sharper, even at first look, its color tone appears to be truer, and the new iPad gamut covers 44% more into the sRGB color space compared to the previous iPad. The second picture: funny capture of Walter Isaacson’s Steve Jobs autobiography put on – top the God of Wealth’s altar in our office 😀!

⓵⏎Mắc – Xinh – Tốt: a phonetical transcription of the name: Macintosh, which is a play–on–words, Mắc means: expensive, Xinh means: cute and Tốt means: good in Vietnamese 😀. 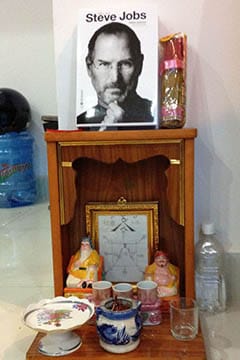