ontinue trialling my newly – built kayak with some short paddlings. The adjusted rudder pedals now work properly and smoothly. The battery system charged well, everything works as expected. One point I’ve found out is that, the SLA (Sealed Lead Acid) battery should be positioned upright for it to be charged to its maximum capacity. I was thinking about Lithium battery which is more compact, lighter, has more capacity…

But that would be later, maybe I should deploy a system of SLA and Lithium in parallel, as the SLA could provide short – bursts of hight current (required by the bilge pump), and the Lithium could provide a lower amperage for a longer period of time. Today, the Sea – to – summit spray skirt package arrived, the all – neoprene thick skirt fits well to the cockpit coaming, it should do its job of keeping the water out well!

Also I’ve found out that I need to adjust the seat’s back rest a bit, it’s too high that strapping the skirt on could be a bit difficult. One important add-on to the kayak is the water drinking system. 2nd image: the 2 plastic water bags, from left to right: 10 and 8 liters respectively. The smaller oval – shaped water bag is put in the forward compartment, with a water tube running through a cable gland over the deck.

That way you can drink (suck the water out of the reservoir through the tube) without having to stop paddling. The low – lying bags would help with the boat’s stability, no more bulky water bottles needed, and the deck space would be clearer for other items of necessity. I’ve found this drinking system idea very practical, as I’ve lost quite some water bottles lashed to the bungee cords in heavy sea, when strong waves wash over the deck. 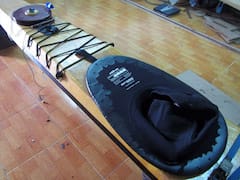 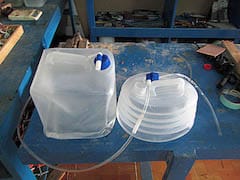 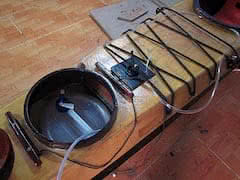 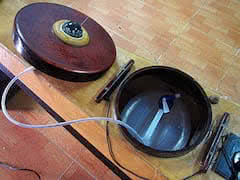