ade the first trialling of my kayak today, a short 10 km paddling just to verify if everything works! All goes smoothly, hurray! The solar panel is adding juice to the battery, could see that obviously since the lights have become more intense, and pump has become much stronger (I almost used up the battery the day before). Under this tropical sun, that wouldn’t be a hard task for the solar cells, I guess!

The rudder works nicely, the pedals could be easily kicked by my legs, changing direction instantly. The pedals movements could be improved however, to become lighter and more responsive. Every parts of the boat simply just work! And the paddles also, I’m feeling pleased with the new paddles. And for the main part, the boat itself… it feel just a bit more stable (that’s what I was expecting for), but the hull now tracks much better!

It could go quite straight even without the rudder deployed. The feeling that the shorter boat is very steady, and could possibly go faster compared to my previous Serene – 1 kayak. Though the LOA (length over all) of Serene – 2 is shorter, its LWL (length waterline) is pretty much the same. The higher free board makes climbing into the boat a bit more difficult, but that’s not a problem, cause the cockpit now is a bit larger.

The slightly higher free board is very important, it should keep water out of the deck for many of the times, and hence waves shouldn’t threaten flooding the hatches much. My overall feeling is very pleasing, for those months of efforts put into the watercraft! 😀 But 10 km is too short, I need to trial the new kayak more, and record the routes by my Garmin, to really evaluate the boat’s performances in precise numbers. 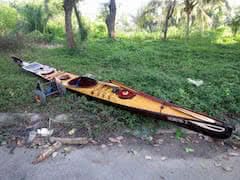 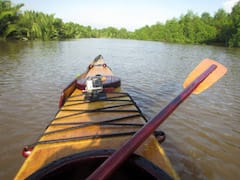 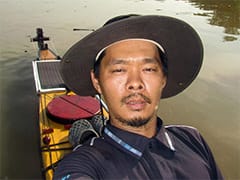