irst image: assembling the rudder’s components, the rudder in its dropped down position, 2nd image: the rudder in its retracted position. Everything works smoothly as calculated, the blade could be pulled up and down by a pair of line running back to behind the cockpit (but that would be done later, when attaching the rudder to the kayak hull), with two circular ratchets glued on the two side of the rudder blade.

4th image: the rudder stained with colored – epoxy and then painted (with transparent PU – PolyUrethane). It looks so nice, the dark brown color with coarse wooden grains 😀. The rudder control system is another complex problem, but that I would address it later on on the following phases of this building project, as I’m still hesitating between the two styles of rudder steering mechanisms as described below.

One style is the T – bar of those Olympic kayak, and the other is the normal 2 – pedals usually found on touring boats. The Olympic style is simpler, but it’s quite counter – intuitive as you would have to use the left leg kicking the bar to the right, in order for the boat to turn right. The 2 – pedals system is more user – friendly, you simply kick with the right leg to turn right. I also may use kind of a cross between the two mechanisms.

This is the first time I use a rudder, so many consideration and calculation have to be made. First in designing the hull, the hull should work efficiently and independently without a rudder, that is, it should track straight in most circumstances. Only under extreme turbulences that the rudder should be deployed, to save yourself from the extreme fatigue of one side paddling, or to have more responsiveness to the moving water. 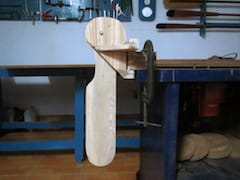 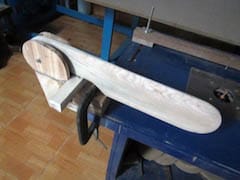 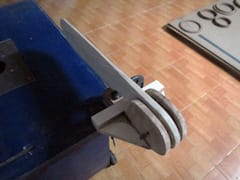 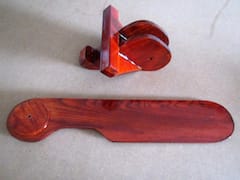