ou would surely ask me why, after glimpsing at many schools and styles of visual art, from classical impressionistic paintings to modern mixed media pieces then settle my favourite to this now quite popular and old fashioned style. I must say that it is his naive realistic style that interests me. And a Jew’s most concentrated subjects of fantasy, nostalgia and religion that fuse toghether are also the common experiences that remain in me throughout the years.

It sounds like the vestiges of Existentialism which were spreading among intellectuals of the 60s’ South Vietnamese cities that maintain an effect on me, but till now, I’d found myself almost liberated from those heritages by re-discovering new forms of joie de vivre, while still maintaining spicies for un-certainties, times, and childhood. The rationale inside Chagall’s works is an old-longing doctrine which states that a painting, like a poem, ought to symbolize the experiences of life as well as the feelings they evoke. It is in his paintings that I’ve found all my memoires, event and emotional, merge together as a whole.

I and the village 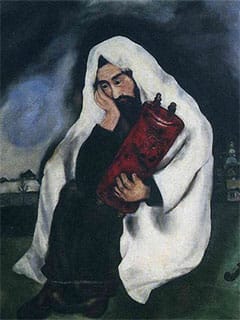