he other day, I was conducting some re – entry tests: supposed that you’re thrown out of the boat by waves, and you need to climb in again, pump the water out to continue paddling before another wave hits you. But the hatches leak so much that re – entry is very difficult, the harder the next tries, as the kayak continues to take water in, it becomes heavy and unstable. This is very dangerous, imagine if this happens on open sea, and I would never want to be in an… “Abandon ship” situation.

I ordered some Beckson deck plates (plus other things) from Amazon.com as a fix to the hatch leaking problem. But it took forever for the ordered packages to be delivered, first from Amazon to a friend in the U.S, then from him to Saigon (some goods can not be shipped directly to Vietnam, so you have to make it via a “freight – forwarder”). Can’t wait the progress, I decided to try another solution: install some rubber washers and tighten the locks to help sealing the hatch better. It works quite well indeed.

The packages arrive today finally! But 2 Beckson screw – in deck plates would be used for the next boat instead, as I’m satisfied with the leaking problem now. Also arrived are some rolls of 2″ – width fiberglass tape, those would be very useful for my next builds, and a spray skirt. A spray skirt is absolutely important for kayaking in rougher conditions. It recalls to me that I was really risking (and was lucky too) when paddling to Vũng Tàu last year with no working water pump, and no spray skirt.

Below are a couple of shots showing the spray skirt in action. On calm rivers and canals, it’s not of pretty much usefulness, but it would become critically important once you enter the steep estuary and coastal sea areas. Also showed is the beautiful lines of my HW – 3, people is all taking photographs or shooting video on the kayak when encountered along my paddling routes these days! Despite some building faults here and there, she looks so gorgeous, almost sexy, doesn’t she!? 😀 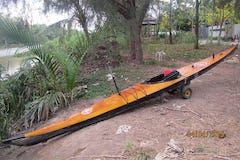 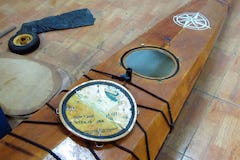 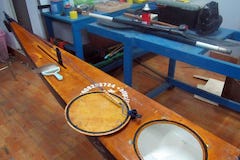 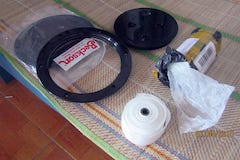 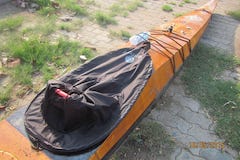 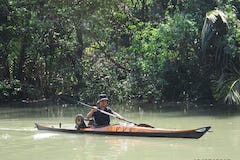