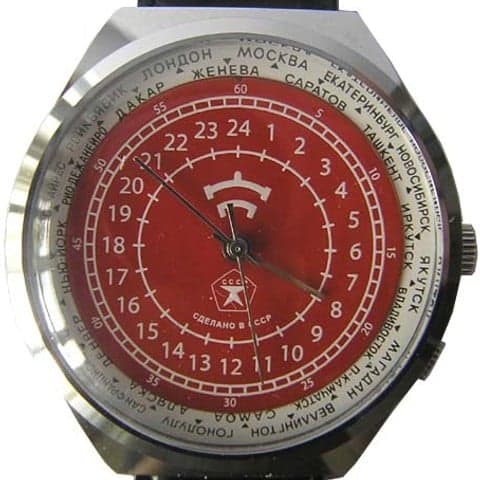 ime, much obsession for time and timing lately! Just purchased this Soviet Raketa wrist watch from eBay (quite cheap the price)! First about Raketa: the brand name is famous among Soviet-built timepieces for its accuracy! Yes you know Russian clocks and watches, fews are pretty good, the rest are… phhhh! Raketa is said to achieve the accuracy of [-10, +30] secs per day.

That’s quite good if you know high-class Swiss timepieces have it at [-10, +10], only some best Swiss-made full-fill the requirements of a chronometer at [-4, +6] secs per day. Yet we’re mentioning mechanical watches, since modern quartz ones easily ensure the range [-2, +2]. Raketa’s movement (the internal clock mechanism) are widely acclaimed as well, though no Raketa pieces is known to be well-water-proof.

But the thing I love about this watch is neither its Soviet origin nor its accuracy reputation. Click to see an enlarged image, you would notice it’s a 24-hour system. One round of the minute hand equals 60 minutes, but one round of the hour hand equals 24 hours, so noon is at the 12nd position, and midnight at the opposite! Yet it takes some times to adjust your habit of time-watching. So why 24-hour? Is it so ambiguous with the AM/PM 12-hour system?

Well, for some who works underground (miners) or undersea (submariners), who works near the (north or south) poles (where days and nights are mostly the same), one works expanding over several timezones, they would prefer this watch. It’s surely suitable for programmers as well, since sometimes we could not differentiate days and nights! 😀