Le Chant des Partisans (or in English: The guerrillas’ song) was a famous French song, widespread among members of France’s resistant movement against the Nazi, many of whom later fought at Điện Biên Phủ battle, including De Castries, Langlais, Bigeard… The guerrillas’ song was once used by French against the Nazi, now ironically used by Vietnamese fighting the French. 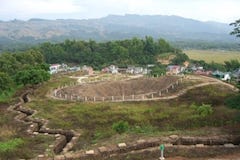 ay, 6th, 1954, 11 PM: Nguyễn Hữu An, commander of the 174th regiment, 316th division, ordered the last attack on the Éliane-2 height (Vietnam nomenclature: A1 hill). The hill ownership has been shifted from side to side many times during the past 55 days, on the Viet Minh side, a price of about 2000 deaths was paid for the area of 2000 m2 of the hilltop. Finally, a tunnel was digged into the hill foot, one ton of TNT explosive was placed in to blow up the whole fortification. The mine blast was starting signal for the ultimate assault into Điện Biên Phủ garrison, fate of the famous battle has just been decided.

Captain Pouget, from Éliane-2 called the commanding post on radio, asking for reinforcements, the situation was hopeless. Major Vadot, in an indifferent voice, told Pouget, like a professor trying to explain a hard problem to his student: Reinforcement? Be reasonable boy, we have no more such!. Then, he ordered Pouget to destroy the radio and defend to death. Suddenly, a voice intercepted on the wave, in French, the Viet Minh radio operator said: Hold the line, please! Gentleman, we invite you one piece of music: Le Chant des Partisants. Vadot listened to the whole song, then blew 3 carbine shots destroying the device.