ontinue to work on the hatches… In my thinking, using the hasp locks is a nice way to hold down the hatches: secured and easy lock / unlock, tight fit, no hassle of lines or bungee cords. But still I have a little concern that those small metal parts could affect the operation of the magnetic compass, which would be mounted nearby. But most good modern compass nowadays should probably resist well to those small ferromagnetic interferences.

Initially, I intended to install three locks per hatch, but after some considerations, I installed four. With three locks, only one failure could easily let the hatch open, while with four, it would take at least two failed locks to make the hatch unsecured. It takes me a few hours to check fitting the hatches’ grooves, then using 3mm – diameter bolts to nail down all the parts (all is made of stainless steel). The result is quite pleasing: all hatches is tightly fitted and well secured.

Next, I make some slots to install the rigging. These are intended for some “heavy – duty” lashing used for the sail. The idea is simple, but it took me some times to figure out how it works: drilling two small holes near each other, then pull a short piece of plastic tube through those holes, then fill the inside with epoxy putty (the tube is waxed to prevent it sticking to the putty). When the epoxy cures, pull the tube out, that would leave behind a “tunnel” to push your lashing line through.

I make only four “anchor points” like this, as it require some “strong holdings” to rig the mast and sail. The other deck riggings, I would just use some screws, bolts and bungee cords. I would try to keep the deck rigging to minimum, no perimeter lines, as I don’t feel very comfortable with a cluttered deck with too much lines and cords and other hardwares, the sail plan would add a bunch of them in addition later on. Also, I don’t really want to punch too many holes through the hull anyhow. 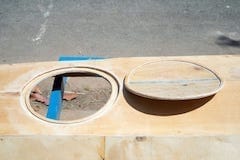 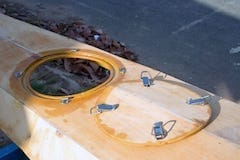 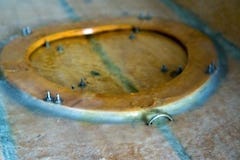 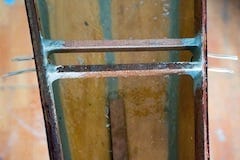 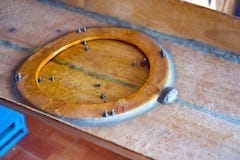 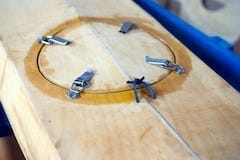