eached my planned milestone of 15 km, in 2h 55′, or 5.14 km/h in average. I’ve been able to increase my sustained – speed considerably from last measured numbers at 4.4 km/h: revised my paddling techniques, learned a bit about the current, wind and especially the tide, changed to a slightly heavier but narrower boat with greater water – piercing power and lower windage. With the progress made so far, I’m confident to say that my 25 kilometres projected target is foreseeable beyond the horizon! 😀 But apart from those numbers, the best things are many beautiful scenes and interesting encounters on my paddling ways, one of which I would really want to tell below!

I came across this fishing boat which is frequently anchored in a calm river corner, and something on its stern immediately catches my eyes (click on the below images to see larger versions, you could have noticed a big model boat at aft). Feeling curious, I knocked on the wooden planks, an old men, perhaps in his late 60s or early 70s appeared. We then had an interesting talk, about – an – hour – long, on everything: boating, fishing, the tide, life on rivers… (pity that I hold on too much to our conversation and forgot to shoot him a picture). The man lives on the boat with his wife, and they do fishing on rivers and canals, roaming from place to place, pretty much anywhere in the Mekong delta. 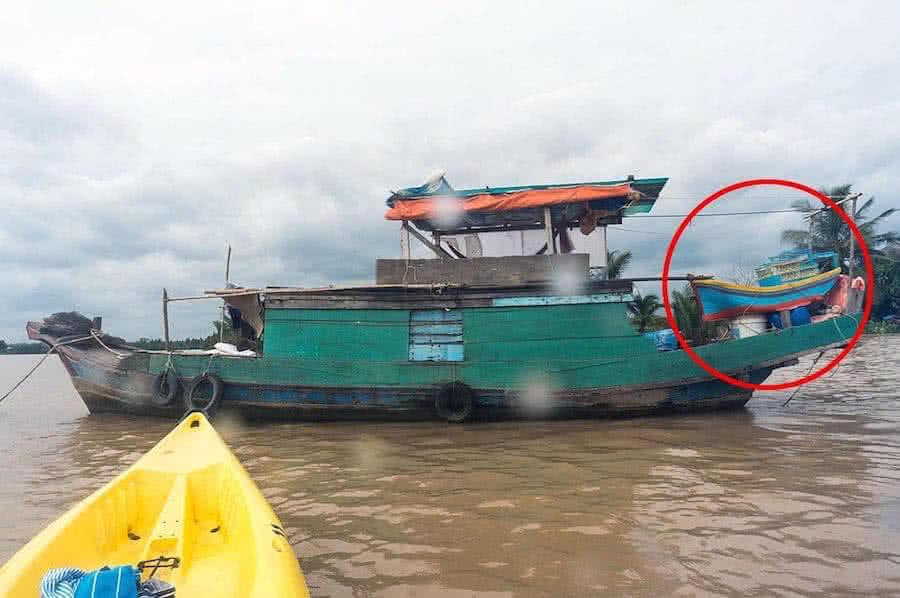 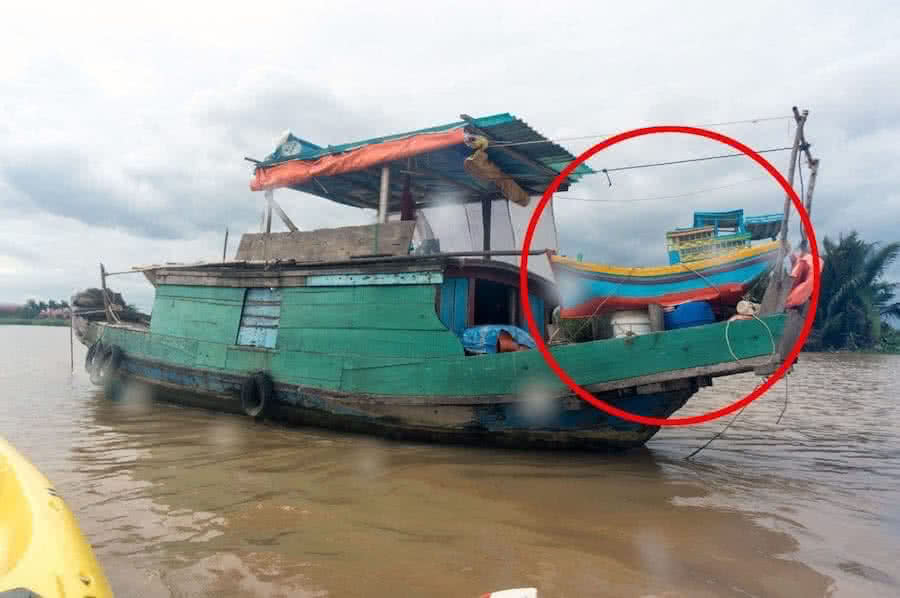 Then, all of a sudden, the man proposed me to try a kind of crab claw sail onto my kayak, then he talked about sailing, I saw passion sparkled in his eyes. He talked about the “good old days” of sail, then he talked about ghe nang⓵, its unique system of daggerboard. The conversation went on to everything about sailing and rigging. The man then explained a bit about his model boat, made out of pieces of foam, glued together and painted outside, the big fishing vessel in his dreams. Everyone has a dream, even this poor, 70 year old man! When I show this photo and recount part of the story to some of my friends, they all indifferently reply in one same way: it’s just a model boat, so what!? 😢

⓵⏎ Ghe nang: a “classic” of Vietnamese traditional boat building, very well admired by ones who got to know it, best described in: The Junk Blue Book – Marion C. Dalby (Vietnamese: Hải thuyền thanh thư) and Voiliers d’Indochine – J.B. Piétri (Vietnamese: Thuyền buồm Đông Dương). Ghe nang has a unique architecture: a light yet durable double ender with wooden upper structure and woven bamboo bottom, a symmetric system of retractable daggerboard at bow’s (and rudder at aft’s) slotted sternposts. Back in its time, the boat is known for its extreme agility (perhaps the best in its tonnage class) and seaworthiness in rough water and difficult weather conditions.

rossed a major milestone in paddling: 10 kilometers roundtrip finished in 2h 15′ (including resting time), speed – made – good averages out at 4.4 kilometre per hour (km/h), or almost 2.4 knot. That is already better than the baseline usually applied for casual paddlers at about 3.3 km/h, but much behind that of frequent paddlers, they can easily make it at 5 ~ 6 km/h. Of course, velocity depends on various other factors, most importantly the boat and paddle designs, which I currently don’t have much choice.

About range, that’s still not half of my ultimate (projected) target somewhere around 25 km, which approximates a typical whole – day canoe camping trip. Still having a very large gap to try and overcome! Paddling for me is not racing, and like they often say: it’s a marathon, not a sprint!, but you need some measures to evaluate your performance progress anyhow. As I paddle on, I’ve learned some below lessons.

Most beginners like me are low – angle paddlers, naturally. That is arms rarely raise up to shoulder level, the paddle’s shaft is more often in a horizontal position, the “angle of attack” at which the paddle’s blades enter water is much smaller than 90°. In contrast, high – angle paddling requires keeping ams at shoulder level, paddle’s blades penetrate water in a near – vertical manner. For beginners, the first approach cause less tiredness: arms don’t need to be kept high, and movements are easier.

But high – angle is more efficient: first, blades enter water at steep angle, providing more propulsion. Second, blades are nearer to the hull, producing less turning moment and more forward – pushing torque. And third, most importantly, not just your arms pull and push the paddle, but the rotation of your torso brings much force into action, and helps relieving stresses to your hands and arms. So, I’ve tried overcoming the fatigue of high – angle paddling, in the long run, it will make benefits.

Paddling a boat sometimes reminds me of the Latin phrase: Mobilis in mobili, yes you may have remembered it, captain Nemo’s personal motto in Jules Verne’s famous novel: Twenty Thousand Leagues Under the Sea, moving in a moving environment, moving amidst mobility… 😀 The wind, the wave, currents, all affects your rowing, sometimes you go along the current, sometimes against it, sometimes with the aid of winds and sometimes, winds are your enemy.

And the waves too, on the rivers where I go paddling, waves are mostly under 1 foot high, upto 2 feet in the wind gusts, not enough to pose any threat to the boat’s stability, but can make lots of troubles in keeping up a steady course. Sometimes, the current, wind and waves, all at the same time, corporately and deliberately push me off course, sometimes I could hardly make an advance at all, and it turned out to be a real fight in which I need to keep my stamina over a long distance and over extended period of time.

Some of my lessons learned: don’t put too much effort into each paddling strokes, perform strokes gently in a smooth rhythm. Don’t paddle in too shallow water (less than 1 ~ 1.5m), that will considerably reduce boat speed by 1/4 ~ 1/3. (I don’t really understand the physics of this fluid – flow dynamics though). Don’t try to perform many corrective strokes: sometimes the boat is not on an intended heading (e.g: there’s usually some flow turbulence where river changes its direction, or where river’s branches join…)

And you would try to correct it by adding more strokes on one side, it’s not the right way. Instead, just paddle in balance, then offset the heading by a small angle to compensate the dragging effects. That will eventually make your boat’s path slightly zig – zag, but in reality, a direct line is not always the shortest path between 2 points, it’s so in the 2D Cartesian space (e.g: map) only, not in a higher – dimensional space where we take other factors (current, wind…) into account. 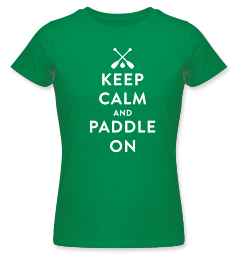 Last image on the right: it’s extremely common for fisherman to catch this kind of sucker fish (Vietnamese: cá lau kiếng) nowadays in rivers and canals around Saigon. This is a dangerous remark for polluted water and unbalanced biosphere: the kind of fish is not native to the Mekong delta, it’s imported into the region from South America, originally as an aquarium fish, but now has grown into great quantities and threaten other fishes… The more we see this “sucker”, the less native species could be encountered! 😢

y new (well, not totally new though) hobby, which I’m taking on quite seriously. GPS tracking on iPhone showed that I can paddle some distance between 3 and 6 kilometers each training session, not too bad for a beginner, right!? For a side note: GPS feature of the iPhone 4S is amazingly good, comparable or better than many navigational devices. I’ve been wanting such a dedicated device like a Garmin anyhow, iPhone apps are features – rich, but the hardware is not ruggedised enough for serious outdoor uses (and it will not float on water too, like some Garmin does), I need to give it additional protections:

The 2nd and 3rd images: water proof bags for camera and other personal stuffs (phone, wallet, keychain, etc…), they’re really important as it rains cats and dogs everyday in Saigon, it’s now rainy season. The camera bag is very useful indeed, it permits shooting and some other (limited) camera adjustments while prevent water from leaking in, can be used for boating, swimming, fishing… but surely not for diving as advertised. Not only good for health, it’s a great pleasure to be in open air, on bobbing water, enjoy the wide sceneries (small flock of swallows follow above my boat all along the waterway), and go fishing occasionally too! 😀 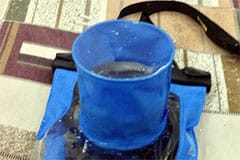 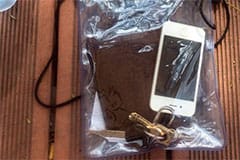 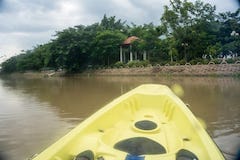 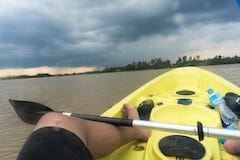 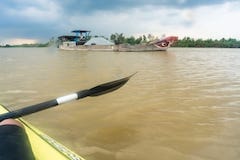 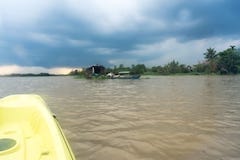 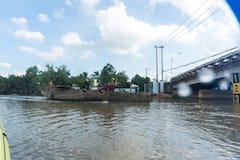 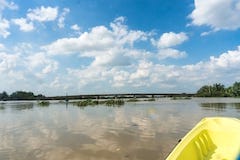 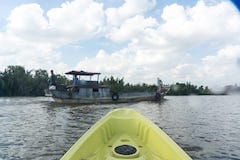 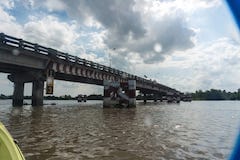 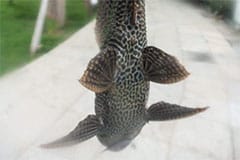