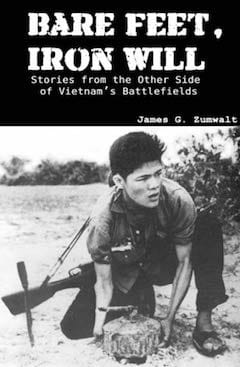 ne more item in my to – be – read list: Bare Feet, Iron Will, by James Zumwalt, a retired Marine lieutenant colonel, son of the Vietnam war’s time US Navy’s Admiral. The book has recently been translated and published in Vietnamese. Though I haven’t got an English copy in hand, my interests rose after reading this interview with the author. Just like Archimedes Patti’s book Why Vietnam?, I would expect stories from intermediate – level officers to contains a lot of facts, events, numbers… that gives details into the things that happened, and offers closer, truer look into the figures involved, unlike those of high – level cadre supérieur (a.k.a politicians).

The author recently gave an interview with Vietnamese presses, in which he confirmed that his book was inspired by The sorrow of war, Bảo Ninh’s novel. He loves the novel and dedicates part of his book to write about this Vietnamese fiction and its author. I knew some 20 years ago that The sorrow of war would be a very profound impact (read more about it in my another post here). It’s just ridiculous that the VN government once forbade (and still limits) the novel, permits it to be appeared on news on occasions only to serve some political purposes, this time is a step toward tighter relation with the US. Below is some notable remarks from the author, James Zumwalt interviews:

Was the loss of a loved one any less significant just because it occurred on the other side of the battlefield? …It just opened my eyes to the fact that we have to recognise that our suffering is mirrored on other side.

When I made my second trip, one of the first places I went to was the Hanoi war museum. And there they had a section devoted to war criminals – one of whom was my father for his use of Agent Orange. (Asked: How did he react to being a war criminal?) He kind of smiled and said: Well it’s a good thing they didn’t arrest me when I was there.

In one case, a doctor told his wife he would probably be gone for six months to a year. He was gone for eight years, and only got back to visit his wife once… Many of those I interviewed had difficulty pinpointing particular years, but they could tell me if it was in dry or monsoon season. That was the way they looked at it. The year didn’t matter. That shows the mindset they operated under.

There were some 1,400 mothers who lost three or more sons in the war. I think we’d be hard pressed in this country to find more than a handful of mothers who lost more than one son in Vietnam. They considered it a sacrifice they had to make.

In the interviews I did with hundreds of NVA / VC I asked them what their motivation was. It was not communism but rather it was nationalism and the desire to reunify the country… I believe it is part of the Vietnamese people’s DNA. To them, there was never any alternative, they just had to prevail.

Look at the Vietnamese who defeated the Japanese in 1945, the French in 1954, the Americans in 1975, and again the Chinese in 1979, I don’t think we realised we were probably fighting against Vietnam’s own Greatest Generation. (yes we sacrificed our best seeds in those wars, you know what the sh… is left as of today! 😢)