collective compile of various hacks on the Dell Inspiron Mini 9. People has found lots of things to play around with this tiny toy. The fact that though a compact machine, the Dell Mini 9 still has some space and slots (power, data) inside to embed a few more devices internally. These hacks range from little enhancements to very useful features for someone. I would really want to try adding a touch screen to my Dell mini sometimes.

One member of the My Dell Mini forums decided to add a “hard drive activity” indicator. He managed to do this without replacing either the low battery indicator or the power LED by placing a new blue LED near the battery light. So when the SSD is in use (the Dell Mini doesn’t actually have a hard drive, but rather a solid state disk), the blue light glows. When your battery light gets below 10%, it will blink orange.

Wireless mouse is very handy, I would always want to get rid of mouse cable. In this hack, the “hacker” mount the Nano Receiver for Logitech VX Nano laser mouse into the Mini 9 without breaking down the receiver or soldering it in. That way it can be removed or replaced easily in the future.

Today, a GPS receiver chip is quite cheap (and small). We can solder an (USB) GPS chip onto the toy’s board, and turn the machine into a GPS – enabled device, on which various interesting applications can be deployed. This is really a brilliant idea! (besides: GPS receiver chip with size of a small dime). Well, if you don’t have a car with GPS navigation, you can carry the Dell Mini with you! But don’t blame it if the navigation software tells you about the safe road ahead while you’re at bottom of a lake!

You can also turn your Dell mini 9 into a 3G mobile phone by adding a PCIe WWAN card. In this simple hack, you replace the machine’s wireless card by the WWAN card, plug a SIM in, and using software like MobiLink to make telephone calls. Of course with 3G, you can have Internet and other things come with WWAN. 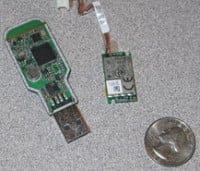 With the 8.9″ LCD (quite small), a point and click device like touch screen is very neccessary. I found this hack the greatest one on Dell Mini 9, you can leave your mouse at home, browsing (web, file…) and other various tasks can be done by touching directly onto your screen. Imagine we can install an (online) handwriting recognition package and input Chinese directly on the screen (though we’d had SCIM which does the job quite well). Packages for Chinese handwriting recognition are available in some Chinese Linux distros. 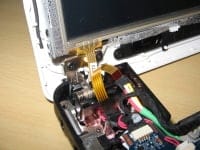 Mac OS X (10.5 – Leopard) run smoothly on Dell Mini 9. This is perfect for ones who adore Mac look and feel. Just download the Leopard ISO file, burn a DVD, boot up the machine with an external DVD drive and proceed with the installation. However, to take, you have to give somethings, ethernet simply won’t work, however, you can manage to get through with wifi and sound.

y new Dell Inspiron mini 9 notebook: the company laptop is far too heavy to carry back and forth daily, and this is really a cute tiny toy to have. Having dimensions briefly larger than a pencil, the notebook is really light, its display is bright and clear, sound is pretty good, and the external speaker is amazing for such a mini notebook.

This is a laptop with no moving part: hard disk is solid – state (16GB), no ventilating fan (the temperature is just right after long use). The disadvantage with the toy is that keyboard is quite small and strange, which may take times to get familiar with. Ubuntu (Hardy Heron) came pre-installed, and every softwares work out-of-the-box: graphics, sound, wifi, webcam…

The distro is a customized version for Dell called Netbook Remix, however, after a while, I get bored with that and switch to the default Gnome view. The good point is that mp3, Acrobat Reader, Adobe Flash, Sun Java… licenses come with the distro, there’s no need to hack for these stuffs. Please see below for some GUI screenshots.