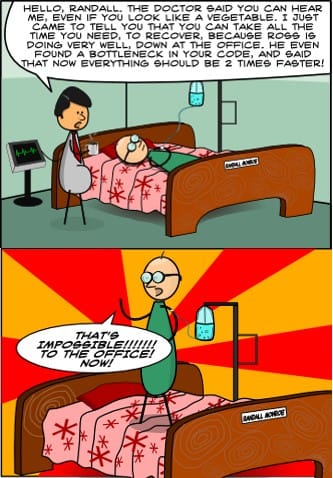 he computer industry is the only industry that is more fashion – driven than women’s fashion. (Larry Ellison) => right, so much dogmas, lies and myths.

Well, it has been said over and over again that the tremendous cost of programming is caused by the fact that it is done by cheap labor. (Edsger W. Dijkstra) => needless to say, another so true dilemma!

I do believe I have post-traumatic Java syndrome. (Renae Blair) => me too, though not very serious!

One of my most productive days was throwing away 1000 lines of code. (Ken Thompson) => with me even more

Before code can be reusable it first has to be usable. (Ralph Johnson) => certainly!

The goal of Software Engineering is to build something that will last at least until we’ve finished building it. (unknown) => applied to many projects!

Evolution always seems to win out over revolution when it comes to technology. (Rick Hightower) => don’t believe in one who screams for revolution!

If you have too many special cases, you are doing it wrong. (Craig Zerouni) => solving is not creating more problems (special cases = problems)!